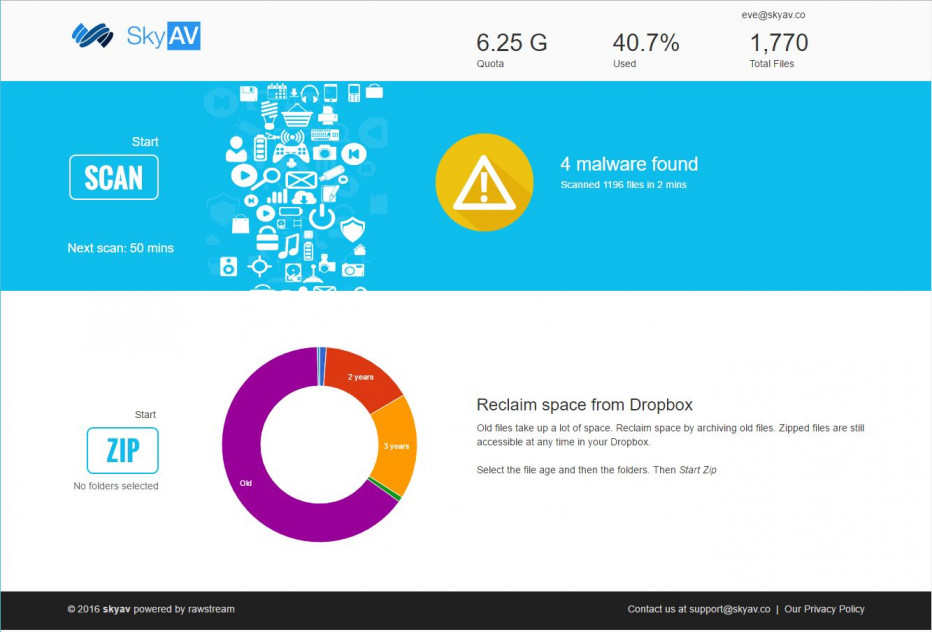 London, December 15, 2016 - Internet security company Rawstream is launching a cloud anti-virus software that meets an unmet need: protecting the cloud-based files on Dropbox for emerging market users who only use mobile devices. Best of all, this new solution, SkyAV, is free.

Said Rawstream founder Brian Azzopardi: “We always thought it was unfair that people in developed markets had their Norton and McAfee anti-virus software protecting their files on their laptops and PCs while emerging market users really had no protection. After all, Dropbox doesn’t offer anti-virus protection to users so their files in the cloud — everything that is important to them — are completely vulnerable to attack.”

Emerging-market consumers are currently using over one billion smartphones. Many of these are lower end phones that cannot run resource hungry security apps without making the phone sluggish. “SkyAV is for the people who don’t have the iPhones, the Galaxys and other high-end Android phones,” Mr. Azzopardi added. “We made it free for them because we know that in many, if not most, cases they couldn’t afford to buy it.”

SkyAV is security-as-a-service. It runs in the cloud and scans your files for viruses and malware. There is nothing to install on your phone so there is no impact on your phone’s performance. The first release of SkyAV on December 15 scans Dropbox folders. The Google Drive upgrade will launch in the second quarter of 2017. Another benefit of SkyAV is it that also helps consumers save storage space by compressing documents. That way consumers will be able to add more files to their Dropbox accounts. And they will know that they are safe. “We believe the world’s first freemium cloud anti-virus software is our small contribution to making the world a better and safer place,” said Mr. Azzopardi.

Content filtering products limit themselves to reporting websites browsed. Not Rawstream! We track desktop applications used and the time spent in them. This is valuable data for at two reasons: license management, and tracking shadow IT. Rawstream's Application Usage data help you...